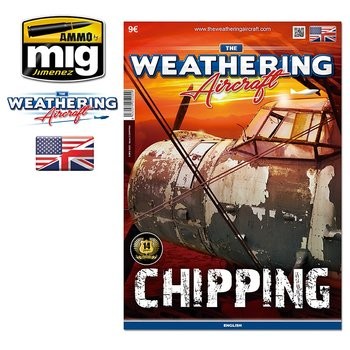 WARNING. This issue is only in ENGLISH lenguage.

The second issue of The Weathering Aircraft is already in stock! In the first issue, we explained everything about panel lines, now we´re going to focus on chipping. Mastering these techniques is imperative to creating good chipping effects in our models, making them more realistic, closely resembling chipping on real vehicles. We´ll show in detail several different ways to recreate paint chips: using especially designed chipping products, liquid masking, or salt grains, among other methods. We are also going to see how and in which situations to use the various types of paints and tools to get different chip sizes and shapes. Once again some of the best aircraft modelers in the World have collaborated in this new issue, placing special emphasis on showcasing wonderful models as well as accompanying them with a clear and easy to understand text and high-quality photos. In conclusion: a whole package to learn everything you´ll ever need about chipping your model aircraft.