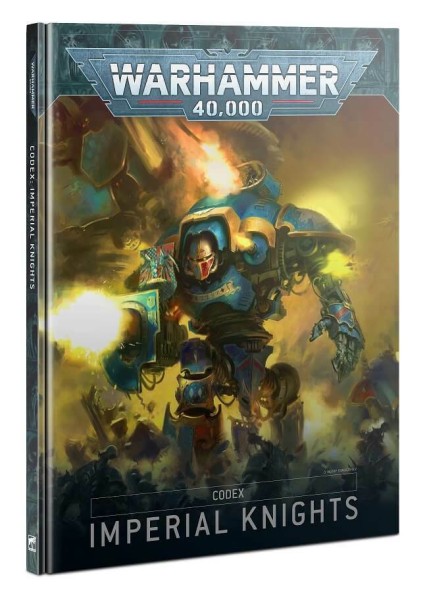 The Imperial Knights march to war with earth-shaking footfalls, towering over mortal soldiers and lesser machines. Each Knight is a towering engine of destruction, a bipedal killing machine bristling with firepower and devastating close-quarters weaponry. Linked to their Noble pilots by the arcane Throne Mechanicum, the Knights move with a speed and grace that should be impossible for engines of their size, guided by the Code Chivalric to wipe the Imperium's enemies clean from the galaxy with thunderous gouts of flame. Their glory is that of Humanity's golden age, and none can resist their titanic charge.

Knight Houses field great hosts of these majestic war machines, from nimble Armiger-class squires to the implacable Dominus-class, and make war steeped in their ancestors' rich traditions. Some storied Houses can trace their histories back before the coming of the Emperor, when their worlds were beset by an Age of Darkness kept at bay only by the heroics of their forebears. Others Imperial Knight pilots break from their noble Houses and set out on the path of the Freeblade – commanding their Knight for personal gain, or joining a Freeblade Lance to win renown across the galaxy.

This resplendent book is a must-have for Imperial Knights players and collectors, as well as those who enlist the services of a Knight in their Imperium armies. Within its pages you'll find the rules to play an army of Imperial Knights – including Noble Houses, Knightly Teachings and Oaths of the Code Chivalric – as well as background lore exploring the structure and stories of the Knight Houses, from their ancient origins and legendary victories to the time-steeped traditions and cherished heraldry that each Knight carries to war.

– In-depth background on the Imperial Knights, their relationships with the Imperium's factions, and the structure of their Great Houses
– Majestic artwork depicting the glory of these regal warriors and their titanic steeds, as well as the livery of their most notable Houses.
– All the rules you need to play an Imperial Knights army, including the Freeblade Lance Army of Renown, and how to include a Knight in other Imperium armies
– Complete rules for Crusade campaigns and narrative games, in which your Knights embark on great Quests to become legends throughout the Imperium
– An 'Eavy Metal miniatures showcase full of lovingly painted Imperial Knights miniatures