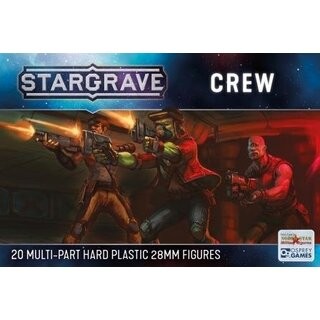 No matter their home planet, background, role, or motives for roaming the dead stars, anyone signed up to an independent crew is going to be tough, ruthless, and dangerous. You don’t stay one step ahead of the pirate fleets – or your competitors – if you’re not…

This boxed set offers enough parts to build 20 lightly equipped female characters for Stargrave, ideal for use in independent crews or as members of the pirate fleets hunting them down. While this kit includes a range of weaponry and a mix of alien and human heads, even more variety can be achieved by mixing in components from other Stargrave female boxed sets.

Models are 28mm sized, made of plastic and come unassembled and unpainted.