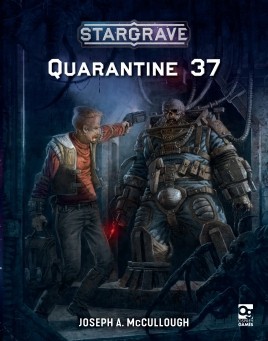 When it was commissioned, Imperial Research Station 37 was home to nearly 10,000 scientists and researchers working on a vast array of biological and chemical projects. Then, six months before the outbreak of the war, Station 37 went dark. No escape pods were launched and all attempts at communication went unanswered. Only a solitary, repeating broadcast filled the silence: "This station is under quarantine - do not approach”. When the war came, the station was forgotten, left to drift lifelessly in its empty system. Now, in the aftermath of the Last War, Station 37 has been rediscovered and its broadcast heard once more…

Quarantine 37 is a supplement for Stargrave in which players lead their crews into an abandoned space station, hunting for lost technology, unique research, and forgotten experiments. Compete with your opponents for these valuable resources across two competitive mini-campaigns, or venture into the vast maze of corridors and laboratories alone in the first Stargrave solo campaign. Also included are six new soldier types, new backgrounds and powers, terrifying additions to the bestiary, and a new advanced technology table packed with loot to help you in your adventures in the ravaged Galaxy.