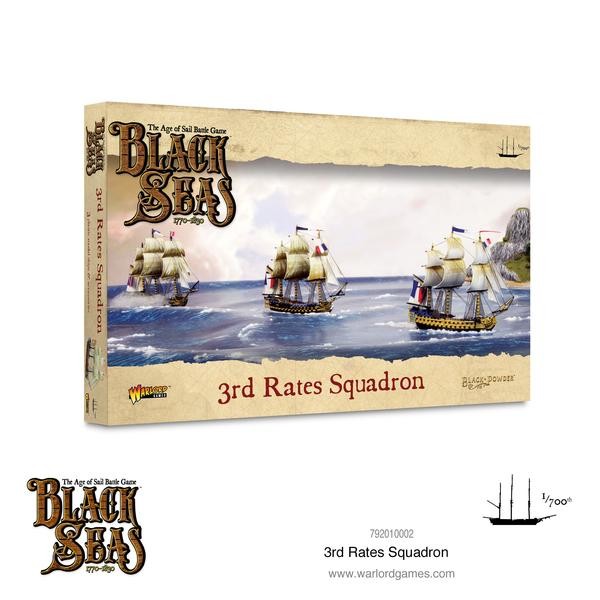 Beschreibung Bewertungen 0
Beschreibung
A 3 rd rate ship, as defined by the British rating system, was a ship of the line which mounted... mehr
Menü schließen
Produktinformationen "3rd Rates Squadron (1770 - 1830)"

A 3rd rate ship, as defined by the British rating system, was a ship of the line which mounted between 64-80 guns. Usually, this would mean two gun decks. Despite their relative size and power compared to larger 1st and 2nd rates, it was considered that 3rd rates maintained an effective, perhaps even superior balance between sailing ability, firepower and cost.

For a number of nations, 3rd rates were the most popular ship size. Cheaper to operate and easier to sail without the sacrifice of offensive capability, the only ships a 3rd rate could not single-handedly engage were larger three-decked ships. A large number of 3rd rates were built and employed on a variety of missions.

The 3rd Rates Squadron kit is generic, meaning you can use it to represent ships of any nation. The frame has options for you to customise your ships, in the form of differing figureheads and stern plates; enabling you to make your fleet truly unique.

The 3rd Rates Squadron box contains all you need to get these vessels to the tabletop. These are suitable for navies of any nation. The kit includes a bobbin for rigging your vessels, sails and decals for every nation capable of building & sailing third rates, as well as all the gaming materials for using the vessels in your games of Black Seas.