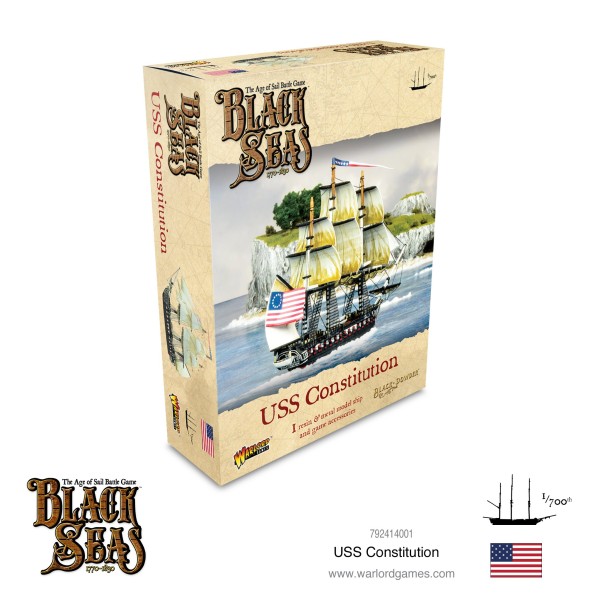 USS Constitution was one of six Heavy Frigates commissioned by the United States Congress in 1794 to protect American shipping against Barbary Pirates in the Mediterranean. These frigates were designed to outmatch the frigates of any other nation while remaining nimble enough to slip away from larger ships-of-the-line.

These six frigates (Chesapeake, Constitution, President, United States, Congress, and Constellation. Chesapeake, Constitution, President and United States) were armed with 44 guns, normally a mix of long 24-pounders and 32-pound carronades. Across their service life, these ships would often end up over gunned, carrying upwards of 50 guns into battle.

Revolutionary construction techniques gave the six frigates much thicker hull planking than their British or French equivalents, allowing them to soak up a tremendous amount of punishment. It also allowed them to carry a much heavier armament relative to their size, as seen by the arrays of 24 and 32-pounders carried on the 44 gun vessels.

'Old Ironsides' as she would become known, launched in Boston October 21, 1797. She first saw action during the First Barbary War, serving with a squadron of American frigates in the Meditteranean under Captain Edward Preble. While blockading Tripoli, the USS Philadelphia ran aground and was captured by the Corsairs. Constitution's broadsides provided vital fire support for the squadron during the attempts to rescue the Philadelphia.

Eventually, the Preble would resort to using a captured ketch loaded with 100 tonnes of black powder to destroy the Philadelphia in Tripoli harbour - a plan which failed when the fireship was destroyed prematurely by fire from the Ottoman shore batteries. Despite an inconclusive naval campaign, the war was eventually won by the heroic actions of the US Marines at Derna.

When war broke out between Great Britain and the United States Constitution attempted to join a five-ship squadron off New Jersey. Unfortunately, she ran afoul of a British squadron which immediately began pursuing her.

Initially finding himself becalmed, things were looking bleak for Captain Hull and the Constitution. However, an inspirational idea found him using rowboats to tow the ship away from his pursuers, allowing him to escape after a 57-hour chase.

During the war, the Constitution was employed as a commerce raider, indiscriminately capturing and burning British naval vessels. Twice she came up against British frigates, and twice she reduced them to matchsticks, her reinforced hull shrugging off repeated close-range broadsides, earning her the nickname "Old Ironsides."

In the Game of Black Seas

USS Constitution should be in the thickest fighting on the table, leading the charge into the enemy battle line, using her exceptional survivability to weather the storm of shot and shell while blasting away with her own guns.

While she might not be able to tangle with larger First Rates like Victory, she can hold her own in frigate actions, tying up the enemy fleet while the remainder of your ships go after other objectives or gain a more advantageous position.