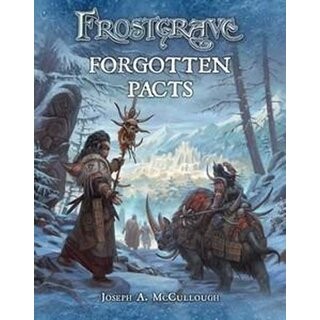 In this supplement for Frostgrave, players lead their warbands into the northern reaches of the city, exploring the ruined temples of the Frozen City to search for the lost secrets of evocation - the art of summoning demons. While the lure of such knowledge is great, few wizards have ventured into this region as it is overrun by barbaric northern tribesmen who have descended from the hills in their own search for treasure. Marking themselves with demonic sigils, many of these barbarians have aligned with ancient powers discovered amongst the temples. Along with a host of new scenarios focusing on the exploration of the temples, the book also contains new treasures, spells, soldiers, and creatures that can be found amongst the ruins.

Joseph A. McCullough is the author of several non-fiction books including A Pocket History of Ireland, Zombies: A Hunter's Guide, and Dragonslayers: From Beowulf to St. George. In addition, his fantasy short stories have appeared in various books and magazines such as Black Gate, Lords of Swords, and Adventure Mystery Tales. He is also the creator of the wargame, Frostgrave: Fantasy Wargames in the Frozen City, and co-wrote The Grey Mountains, a supplement for the Middle-Earth Role-Playing game.Dmitry Burmak is a freelance artist from Moscow, Russia. After graduating as an engineer, he decided to change his career plans and took another degree in Fine Art. Dmitry started as an artist in the video games industry and now works as a freelance illustrator with his wife Kate, who is also an artist. Dmitry specializes in fantasy and sci-fi art for roleplaying games, card games and video games.