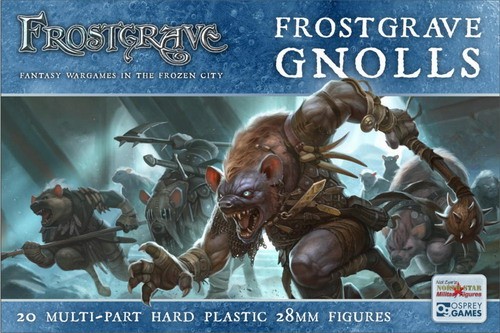 Beschreibung Bewertungen 0
Beschreibung
After an ancient law banned human fighters from the arenas, the Beastcrafters exploited a... mehr
Menü schließen
Produktinformationen "Frostgrave Gnolls (20)"
After an ancient law banned human fighters from the arenas, the Beastcrafters
exploited a loophole and created numerous varieties of anthropomorphised animal
hybrids. While many different species were exploited to this end, rats, dogs, and
hyenas provided strong, reliable subjects and were amongst the most common
hybrids. After years of Beastcrafter tinkering and manipulation, robust strains that
drew from these three species were perfected. These gnolls, as these strains came to
be collectively known, were bred in the thousands in the years before the cataclysm,
and sold as slaves and gladiators to the arenas and as shock troops to the armies of
foreign powers. When the great storm struck, several groups of the hardy gnolls
survived, trapped in isolated colonies deep beneath the city. Over the next
millennium, they multiplied, forming numerous tribes and packs, warring with each
other in their underground warrens and hunting the great worms.
Today, gnolls form what is easily the most numerous group of living creatures
inside the Frozen City. Most gnolls will belong to one of the many tribes, clans, or
packs that claims large areas of the underground as their territories. While gnolls only
rarely come to the surface, their hunting parties are occasionally encountered by
explorers in the ruins.
Gnolls possess a low-level human intelligence. They are capable of limited human
speech and can produce simple tools and weapons, though they prefer to steal or
loot rather than create. Gnoll warriors include all of the same types found in human
societies, though those that rely on specialized weapons or heavy armour such as
knights and marksmen are uncommon.
Weiterführende Links zu "Frostgrave Gnolls (20)"
Bewertungen 0
Bewertungen lesen, schreiben und diskutieren... mehr
Menü schließen
Kundenbewertungen für "Frostgrave Gnolls (20)"
Bewertung schreiben
Bewertungen werden nach Überprüfung freigeschaltet.
Kunden kauften auch Kunden haben sich ebenfalls angesehen
Kunden kauften auch
Kunden haben sich ebenfalls angesehen
NEU 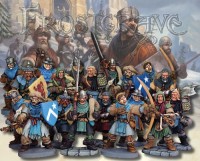