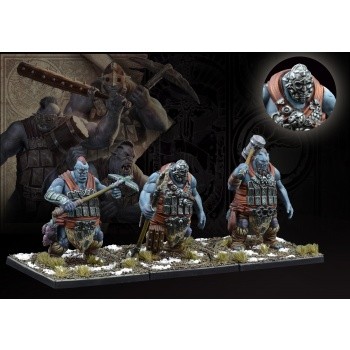 Ugr occupy a very strange place in Nord society. They are the exalted progeny of demigods, capable of doing the work of a dozen men and terrifying foes when roused to anger. On the other hand, it is difficult to stand in awe of a being that is challenged by numbers that exceed a single digit, simple concepts such as personal hygiene, or the mind-boggling mechanics of doors, for that matter.
Regardless, Ugr are a tremendous asset to whatever community they are assigned to, a fact that the Einherjar Angbjörn, High King of Mannheim and Father of Ogres, exploits to maintain the balance of power with a deep cunning one would not expect from his corpulent frame and constant inebriation. After all, there are few creatures on Eä that will not pause and reconsider any rash action, when faced with the single-minded aggression of an Ugr band.
3 models per pack Includes Command expansion and regiment stands. 1 iCard.