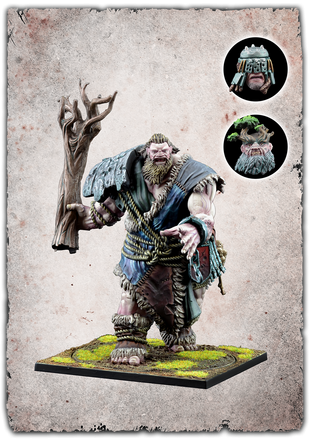 Following Ragnarok and the burning of Yggdrasil, the Jotun threatened all human life in the northern continent. The emergence of the Einherjar from their slumber brought their dominance to an abrupt and final end. With their greatest Shaman-Kings broken, the Jotun were made to bend the knee and swear allegiance to their Einherjar and their human subjects. Today, the few remaining Eihnherjar can grant truly exceptional leaders authority over one of these towering behemoths. Strong and tireless, a Jotun is a priceless asset to the community he is assigned to.

Some enterprising Jarls are willing to bring them along on raids. Ruinously expensive to transport and feed while at sea, Jotun soon prove their value on land. Towering over 6 meters, a Mountain Jotnar is a primordial force of destruction on the battlefield. Their powerful limbs can shatter a shield line in a single blow, hurling full grown men through the air like they were toys.