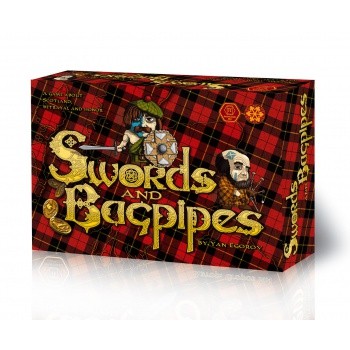 Swords and Bagpipes is a unique mix of strategy and deduction. It’s based on the events of the First Scottish War of Independence and inspired by Braveheart movie.
It's a game of social deduction, tactics and... betrayal! Heroism goes side by side with treachery. The players take on the roles of Scottish clan leaders during the medieval War of Independence.
English forces invade your country. You have to choose: either you support Scotland in the fight for freedom... or you just betray other clans to gain money and power. Yet, be warned: every other clan leader is free to make the same decision!
The rules of Swords and Bagpipes were created with the famous Prisoner’s Dilemma in mind. When you betray others, you become richer. This drives you closer to your personal victory.
However, if Scotland suffers an ultimate defeat, victory conditions change! The player who betrayed less becomes the winner. As a result, you have to balance on a thin edge of your and other players' interests!
Swords and Bagpipes gives you a true feeling of how it was like. How it is to defend your country, when the enemy is strong, the victory seems unreachable... and the choice is in your hands!