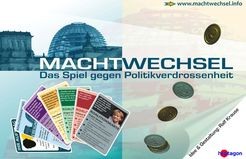 Beschreibung Bewertungen 0
Beschreibung
In  Machtwechsel , players must build the German government. At the start of the... mehr
Menü schließen
Produktinformationen "Machtwechsel"

In Machtwechsel, players must build the German government.

At the start of the game, each player has two action cards (Event and Coalition) and an initial capital of 4 "Penunzen". The remaining action cards are shuffled and form a draw pile. The top action card is revealed.

The goal for each player is to collect, by exchange or purchase, as many cards belonging to your order coalition colors. Through the skillful use of event cards, a player can influence the campaign in his favor and prevent the other players from doing the same. When necessary in a political situation, you should not hesitate to exchange your goal by playing the event card "coalition change". Once you have three cards of your coalition color in your hands, you can show it and earn a premium from the bank. However, there is always a risk that event cards from other players will prevent you from doing anything.

The player who collects the required number of matching coalition cards wins.