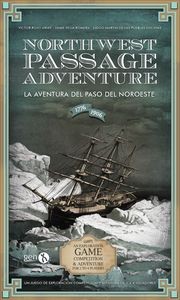 The Northwest Passage is a sea route that lies between northern Canada and the North Pole, joining the Atlantic and Pacific oceans. The first expeditions took place after the discovery of America due to the need of the English to connect both coasts of the Americas to avoid edging the whole continent. However, it was not until the beginning of the 20th century when the adventurous spirit of sailors led them to discover this passage.

The goal of Northwest Passage Adventure – a game of strategy and wit based on a historical adventure, with a playing time of ten minutes per player – is simple: Be the first to discover the Northwest Passage with the help of nothing more than your ship and your ingenuity. We'll have to go tracing the most favorable route as the scenario takes shape, always 4-row vision. We will have to manage wisely our progress chips and exploit our character ability. We will also have the help of the treasures that we will find on the way. The player that crosses first the last row, row 24, wins.