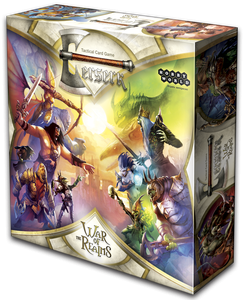 Beschreibung Bewertungen 0
Beschreibung
Berserk  is a fantasy card game that was invented in 1993 and published in Russia in... mehr
Menü schließen
Produktinformationen "Berserk: War of the Realms ENGLISCH"

Berserk is a fantasy card game that was invented in 1993 and published in Russia in 2003. Since then it has become the most popular collectible card game in Russia, Ukraine, and Belarus. In the ten years of its existence, nineteen expansions for the game have been published. Today there are over 4000 different cards, featuring unique illustrations created for Berserk by various artists throughout the world.

Berserk: War of the Realms, the second English-language edition of the Berserk tactical card game, consists of six 30-card ready-to-play decks and 63 cards for customizing. You should start by looking at the comic strip, which explains the rules basics. Begin your first battle, using the Complete Rules as a reference!