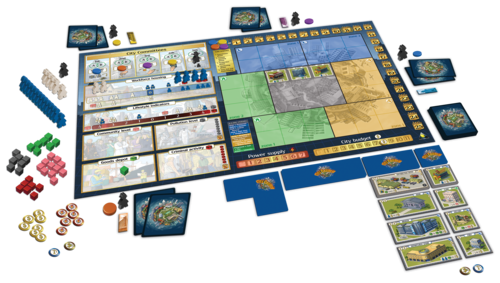 In City Council each player takes the role of a council member of a newly founded city. The government will select the members of the city council for the first few years until the city rises and flourishes, by which time the most popular member will receive the position of Mayor.

In order to build the city, you and the other councilmen must maintain a low level of pollution, fight crime, create jobs, and sustain an adequate city budget. If you and the others don't keep up the good work, the city project might not succeed, the government will take over, and all players will lose.

As a member of the council, you must also strive to gain the favor of the different political groups who rule the streets of your city. As the game progresses and the city grows larger, more and more political interest groups will try to impose their will on the city by knocking on your office door and asking you for small "favors" in which you will have to act on their behalf. In return, they'll offer you their support and you'll receive victory points for your personal cause, possibly allowing you to become the city's first Mayor.