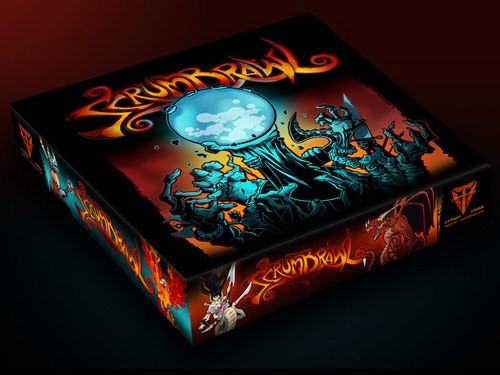 ScrumBrawl is a board game where players control fantastic creatures vying for supremacy within the Arena, scoring goals by maneuvering various types of enchanted orbs into portals set within the Arena or fighting other creatures to the death to prevent them from reaching the portals. The 100-card deck contains fifty creatures with different characteristics that determine how the creature interacts with the orbs (throw accuracy, catching ability, and throwing range), how fast a creature can move, and how effective it is in battle. Many creatures also have unique magic abilities that can be used to manipulate gameplay.

When players summon creatures, corresponding creature tokens (miniature cards that stand erect in cardstands) enter the 20x20 square gameboard, known as the Arena, where the orb and portal tokens await the contestants. In a four-player game, players may compete in teams of two. Goals are scored by creatures that maneuver an orb token onto a portal token by picking up, carrying, handing off, and throwing the orb with their creature tokens. Additionally, players can score goals (known as Skins) by successfully destroying opponents' creatures in combat. Combat results are determined by dice rolls as are the success of throws and catches of the orb between creatures. A number of Alter Reality cards allow players to change the values of individual rolls which make the outcome of every roll something that can quickly be challenged.

Enchantment cards can be played on creatures to grant them enhanced stats or new abilities as well as make them hardier in combat. Event cards, such a Lightning Storms or Fumbles can change the flow the game in seconds forcing players to constantly rethink their strategies for scoring or engaging in combat.

The game ends when a player or team reaches three goals, one of which must be a non-skins goal. No lead is safe and no two matches are ever the same making each game a unique and often humorous experience. The name is the combination of Scrum (a Rugby term where players strive for possession of the ball) and Brawl (a roaring fight, in our case, to the death). ScrumBrawl is the inaugural title for VicTim Games LLC.