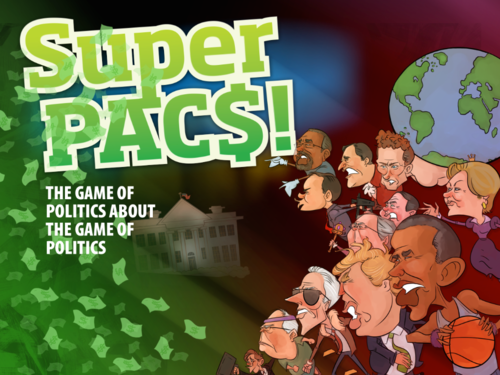 You control one of the aspiring leaders of Humerica and gradually assemble a powerful coalition of factions to help you gain votes, wealth, and power. Each faction gives you a unique exploit that helps you or harms your opponents. Survive unexpected events, strive to win elections, fundraise from your wealthiest factions and, if you like, abscond with the money and purchase investments. The player with the most power wins!

Each player receives a leader card at the start of the game and 5 faction cards. Each turn, a player can
1. campaign (varies with leader, but usually is draw 1 card) or embezzle (get $2)
2. sneak (play 2 cards face down), exploit (play 1 faction card and use the ability listed on the card), or fundraise (get money equal to your total wealth.)
3. use their leader superpower (this costs money, and some superpowers can be used even when it is not your turn.)

There are 10 rounds. At the end of each round there is an event. Events can have positive or negative effects on players, usually negative. 3 of those events are elections, with the very last event being a presidential election.

Faction cards have three stats: votes, wealth, and power. They also have either an exploit ability (used when "exploiting") or a surprise ability (an effect you get if you discard the card, usually in response to another player doing something).

Money (called MegaBucks) can also be used to purchase investments (there are 4 face up at any time) that vary in how many influence points they give you at the end of the game. Some also let you draw cards immediately or affect vote totals.

Each player develops their board over the ten rounds, adding factions to their coalition of supporters, purchasing investments, trying to win elections, and using the exploit and surprise abilities listed on their faction cards, as well as the superpower listed on their leader, to interfere with opponents or improve their own position.