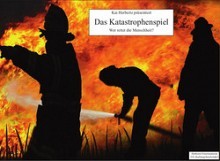 In Das Katastrophenspiel players are taking up the roles of heroic helpers of an unspecified European disaster relief organization. The objective is to provide world-wide aid, but only one group within the organization can attain the highest decoration. Who saves mankind?
Source: Publisher's website

The players have a start team, with people and equipment; using the abilities for the team the players travels to one a catastrophe in the world and manage them; these could be fires, earthquakes, refugees, droughts, floods, and more.
The players gain money for a successful mission, which can be used to buy better equipment or team members. The harder the mission is the more money and/or Victory Points the player gets.

Most VP after eight rounds wins the game.