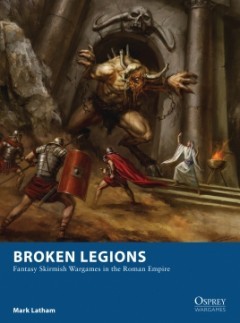 The Roman Empire rules the civilised world with an iron fist, seemingly all-powerful and limitless. And yet, the power of Rome is secured not by its mighty legions, but by small bands of warriors and agents fighting a secret war. Tasked by the Emperor to explore ancient temples, forgotten labyrinths and beast-haunted caverns, they seek out artefacts hidden by the gods themselves, hunt creatures of myth and face enemies that would use dark magic against the empire.
Broken Legions is a set of fantasy skirmish rules for a war unknown to history, fought in the shadows of the Roman Empire. Various factions recruit small warbands to fight in tight, scenario-driven battles that could secure the mystical power to defend - or crush - Rome. A points system allows factions to easily build a warband, and mercenaries and free agents may also be hired to bolster a force. Heroes and leaders may possess a range of skills, traits and magical abilities, but a henchman's blade can be just as sharp, and a campaign can see even the lowliest henchman become a hero of renown.